Add Brandia to your monsters!

Brandia, The Fire Polar Queen is a very nice damage dealer in Summoners War, she's mostly used in Arena Offense to one shot tanky wind monsters like Ritesh and Eladriel, this is possible thanks to her third skill multiplier that scales based on the number of debuffs on the enemy, imagine a +30% of the damage on a defense breaked monster and you can easily obtain a 100.000 shot.

For the same reason she's used also in Guild Wars, and Raid. In R5 a 2000+ Attack and 90% Crit rate brandia could deal even a 70k shot to the boss, which is usually filled of debuffs like def break, glancing and speed debuffed.

Fire Polar Queen's third skill was also buffed in the middle of 2016 with a sleep effect (useless if you use her on bosses who are immune to sleep or to one shot other mobs) but this skill isn't the only reason that makes her a good monster, the shield on her second skill is pretty much hard at level 40 and is coupled with an AoE atk debuff, also like every polar queen her first skill has a huge damage multiplier and it apply a defense break on the enemy.

Our suggestion here is to keep her with at least 20k Hp for backline in raid 5, with an eye on crit rate (>75%) and try to focus on atk% substats (at least 2000 atk if you want to one shot wind tanks)

In-depth stats about Brandia could be retrieved on SWARFARM

Leader Skill:
Increases the HP of ally monsters in the Arena by 44%.
Essence Explosion
410%
Attacks the enemy to inflict damage and weakens the Defense for 2 turns with a 30% chance.
Aura of Dawn
320%
Attacks all enemies to decrease their Attack Power and increases the enemy's chance to land a Glancing Hit for 2 turns with an 80% chance each (Reusable in 3 turns)
Touch of Mercy
840%
Attacks the enemy with an attack where the inflicted damage is increased by 30% for each harmful effect of the enemy. Puts the enemy to sleep for 2 turns after the attack. Targets that have immunity against sleep will be inflicted with 50% more damage. (Reusable in 4 turns)

How to get Fire in Summoners War

How many Devilmon to max skill-up Brandia?

Mininum and maximum stats for any level of Brandia

When I pulled her, my first thought was: "Damn! could have been Tiana or Alicia!" but after building and using her, i´m extremely satisfied with Brandia´s performance, and that´s a lot considering that I own for long time top tier fire nukers like Perna and 2xLaika...
Brandia is more situational than Perna or Laika, and maybe need better support or conditions to shine, but her nuking power is not matched by any other unit I know (except maybe Oberon). I mainly use her in R5 and Labyrinth, and I´ll explain why she´s so powerful.
RAID NUKER: For me this is the best place for Brandia. as the 3-head dragon is usually filled with debuffs, her S3 scales to insane amounts of damage. Im not a Guardian player, so my Brandia is not a top one, but I SWEAR I´ve seen her hitting the boss for MORE than 120K damage (no FIGHT runes on my team). And not only once, indeed, her "minimum" damage (unless atk broken) is around 85-90K. With the last update, the cooldown on S3 is 4 turns, so she´s even more effective than before. Also, her S2 is quite good with 3 debuffs and the def break+high damage S1 help storming the boss. Sadly, this is the tipical unit where you don´t care about Resistance, so Unless you have 2 cleansers in the team, you´ll have Brandia permanently debuffed, and her performance will drastically drop.
LABYRINTH: I don´t use Brandia versus Tartarus, but I do know people that like her to nuke the boss (sooner or later I´ll try her), but I can tellyou that fighting Guilles with her is like a joke even in Hell mode.First of all, her S1 and S2 are quite good to nuke the minotaurs in the early waves, but then versus the boss you just have to give her a Def Break and some other debuffs (I only get 4 in total) and use S3 to hit for about 50% of Guilles health. IT´S JUST INSANE.
I don´t also use her versus Kotos, but I´ll try soon, so I will write about it.
PVP: Here you can have some trouble using Brandia, as she´s not a fast unit so you´ll always have to give her enough support to attack. She can oneshot almost every wind or fire monster with def Break and no other debuffs, I´ve hit some Eladriels and Ritesh for more than 70K damage. However she can´t survive by herself in high rank PVP so better have a good plan to use her or you´ll be in some trouble.
Rune build: I´ve always thought her as a pure nuker, so I went Rage/Focus - ATK/CrDam/ATK. I used focus because I needed a minimum Accuracy for the S1-S2 debuffs. The result is this: 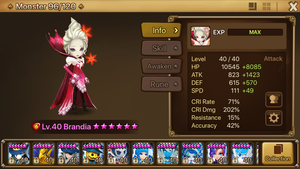