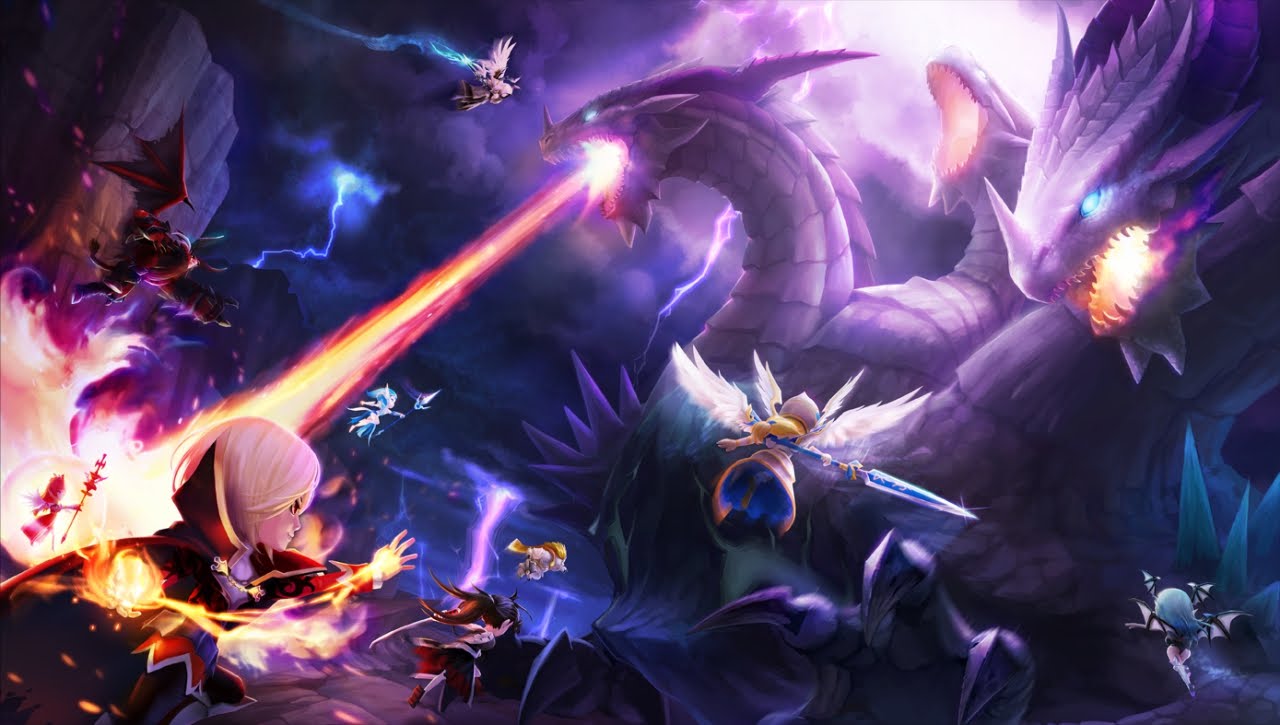 Rift of Worlds is an area where players are involved in multiplayer-format fights against Raid bosses introduced with the 2.0.0 Update. Rift of Worlds is unlockable after completing a World Boss battle at least once.

In this area there are six different Raid bosses, here we will talk about the three headed dragon, Chaos Beast Khi'zar Kha'jul
The Raid boss battle is similar to a regular dungeon boss battle, with two main exceptions:

The Raid battle will have a formation system, which allow tactical positioning among the frontline and the back line.
The group of three players may be set up privately (party leader invites teammates such as guild members, friends or players through chat channels) or publicly, allowing anyone to join a party.

Each player’s party is composed by 6 monsters which can be assigned to a back line and a frontline: both of them consists in two line of four slot each and players can fill monsters in (from 2 to 4 for each line, the sum of which must be 6) Monsters in the frontline will take the majority of the damage and partially protect the monsters in the backline, backliners will take damage only from AOE boss skills, (actually a percentage of the damage the frontliners take from AOE boss skills)

Another exception with regular battles lies in that players can share Leader Skills with one another so that the bonuses will affect all players in a party, but same Leader Skills cannot be stacked: for example two stat% leader skills (HP%, DEF%, ATK% and so on), although element specific leader skills will stack with non-element leader skills (i.e. DEF% of water monsters stacking with DEF%)

Like in the scenarios battles, Arena/Dungeon/Guild-Battle Leaders have no effect in raids, only leader-skills without area restriction will work.

Once battle begins, each player will fight against one of the three heads of the Raid boss, each with its own attack gauge.
However the 3 headed boss has a singular HB bar and debuffs a single party successfully puts on the boss will be shared with every team in the battle.

If all monsters in a party die, the boss head that party was attacking will automatically attack the nearest living ally. Lowering the boss HP bar to 0, the Raid boss will be defeated successfully by the party and each member will be given a set of rewards based on the boss level and contribution to the fight. Players fighting in Raid battles are ranked based on assist and damage contribution:

Rewards for a successful raid battle are:
The kind of rewards given out depends on the level that the raid boss was fought at, and the individual contribution of each player in a party.


Breath of Doom
Attacks all enemies and decreases their Attack Power and Attack Speed for 2 turns. Puts them in an oblivious state for 2 turns after the attack. The harmful effect activation rate will increase as the level of the Raid increases.

Crush of Doom (Front Line Only Attack)
Targets the frontline of the enemy and unleashes an attack that ignores all beneficial effects. The damage increases substantially as the target’s Defense decreases. This attack will target the backline if there are no Monsters left in the frontline.

Rageful Roar
Becomes enraged whenever an enemy gets a turn and the skill will activate automatically when enraged 16 times. Attacks all enemies, removes all beneficial effects and recovers the HP in proportion to the number of removed beneficial effects. This attack will also stun all enemies and permanently increase the Boss’s attack power.

Carnage
When the boss eliminates an entire team of Monsters, the boss’s attack speed will increase and will start attacking all of the nearby enemies.

Destroyer’s Revenge (Passive)
The damage of the next attack will increase in proportion to the number of the enemy’s turn. The damage will reset after the attack.

Ruler of Chaos (Passive)
The 3 heads of the boss will share the attack gauge at the start of the battle using its chaotic strength. Also, the boss will mitigate HP proportionate damage it receives by sharing a single HP among the 3 heads

Example of a good team composition

There are 5 locked areas surrounding the in the Rift of Worlds. From summer 2016, a new Raid Dungeon has be available. This dungeon has unique characteristics compared to other dungeons. Click the link above to discover more and keep updated on this new content

KainMH3
27 April 2017 18:16
GREAT GUIDE. Congrats on the SWM team who developed this guide cause it´s very nice. There´s only one thing left in my opinion: RESISTANCE. This stat is capital in R4 and R5 and CAN NOT be forgotten. Every team must have at least 100% Resistance (Leader bonus included) in the main monsters, specially the healers or any monster with useful passive skills like Dias, Darion, Perna, etc. Nukers may have lower Resistance, but aim always for the max you can get in this stat. A very common mistake for beginners when they hit R4 for the first time is thinking that they have a pretty OP raid team because the HP and attack stats of their monsters are good, but their resistance is about 25% each so they get easily stunned oblivioned and killed while the summoner is ashamed thinking wtf have happened. PLEASE, if you do not hit a minimun resistance value of 70% on your healers and cleanser DO NOT enter R4 raids even when the rest of the stats are Ok in your monster. Get good Endure runes, improve your team and dont let the hidra laugh at you. In R4/R5 room leaders may check your Resistance stats and kick you if they find out they are too low.
Reply

I see your comments all over the place and I just wanted to say I created an account on this website just so I could reply and say your input is appreciated :)

Ive been playing this game for like 3 years now (infrequent and 100% F2p) so I like to think I know at least a bit, but any time Im looking for something more in depth, specific, or detailed, all I need to do is scroll down to the comments and youve got a great explanation for your reasoining. Thanks man!

@TrewMagik  Your feedback is really appreciated too. I like to share my experience and the little knowledge I have about the runes and units of this game, but it´s really pleasing to know I can also help other players with it. THANKS for your comment, it really helps me write and contribute more here.
Kind regards.

Here is a suggestion to people who are starting Raid teams. Raid 1-3 and that are farmable.

Colleen - Always a must, this unit will probably be with you to R5. also provides heal block

Konamiya - This is a clenser, your using him primarity for clensing.

All these units are full farmable, and easy to max skill with the exception of Xiong Fai

there is on spot remaining and you will need some sort of damage dealer.Unfortunatly there isnt a really easy to get and skill damage dealer that is really good for raid's

If your lucky enough to get Xiao Lin, this would be the first option, however the next best option that is somewhat farmable from the guild shop is Tesarion or Theomars. and you can skill them up from buying the pieces in the skill shop (Although this would take forever it can be done).

I hope this ends up helping someone that is just starting raids.

I have all those monsters but not all at 6*. I have sixty three 6* monsters so honorable mentions of some good alternates would be nice but i can do the homework myself. you guys do a great job.