Add Belladeon to your monsters!

Belladeon is one of the most useful support monster in Summoners War.

Bella, as he is often referred to, is farmable through collecting pieces for his summon in the Secret Dungeon discoverable by completing the Light Dungeon available on sundays. So if you're a low level player and just started to play Summoners War we strongly suggest you get him!

The Light Inugami is a very versatile monster that can be used anywhere from arena and guild wars - both attack and defense - to dungeon, TOA and he can even find some place in Raid Battle.

He has to be as fast as possible and keep on attacking, to reduce third skill cooldown as soon as possible. The best way to do that is by using Violent runes on him. also Revenge runes are very good on Bella since his first skill has defense break weakening effect.

Very easy to skill up, just farm for inugami drop in Faimon Volcano and Garen Forest.

How to get Light Inugami

On sunday, the day of the Hall of LIght, try to do more run as possible even in low floors but you have to be very lucky to find him all by yourself, so always keep an eye on the available secret dungeons in the chat room, then when someone finds it, ask him or her to add you (very politely), by simply type that you need it and you'll be grateful for some help. If they are low level player and you have a strong rep monster you will like to get the friendship easy otherwise try with the good manner or try to add them as friends by yourself then wait for a response. Keep in mind that you will have at least 1 hour to collect all the needed pieces, so based on your monsters do lot of floor 1 runs or go for the harder one!

Seize
550%
Attack the enemy and removes all beneficial effects on the target. (Reusable in 4 turns)

Scratch
370%
Attacks with giant claws to decrease the enemy's defense for 2 turns. Also deacreases the Attack Bar by 15% with 50% chance.

How to get Light in Summoners War

You can obtain from Light & Dark Scroll , Secret Dungeon , Temple of Wishes

Mininum and maximum stats for any level of Belladeon

bestsummoner
28 November 2016 13:23
must have! vio/revenge for necro, raid if his defense is enough. Also keep it for db10 (seize is a good strip choice) and also for arena defense if you don't have better mobs. Saw a G2 belladeon with > 35k HP and 200spd and it was really annoying
Reply

KainMH3
14 May 2017 11:50
People rune him Swift in early game, but I don´t like it at all. Turn into Violent as soon as possible. Standard Build should be SPD/HP/HP Violent/Revenge, but I´m using SPD/HP/DEF instead. The extra Defense lets Bella be a Raid frontline and also a good support in Elemental Rift frontline. Get as many SPEED as you can, make him tanky and do not forget to give him some ACCURACY, 25% at least, cause if not it would be hard to get Def Break with the first skill. Concerning skills, use SEIZE wisely as can be a game changer, i.e. debuffing Rakan so other units can stun or Def break him. Remember the 4 turn cooldown of the Mobilize skill and bear in mind you cant just spam it, think when is the best moment to either hear or increase the attack bar. Very good monster, A MUST HAVE for every player and the best 3* monster in the game along with Bernard.
Reply

Still using her to clear my TOAH 100 with both Ath'taros & Lyrith. Her 3rd skills go so well together with Bella

I can't find dungeon!!! whoever finds him does not add people!!!

Yes, it´s frustrating to find a Bella SD. But we all have suffered it, so just keep on trying...

Bella was my priority one when I started playing SW. Also was my first 6* mon. Great healer with the possibility to decrease the defense. I´m very happy about six staring him as my first mon. Need him all the time for a lot of things. As KainMH3 mentioned I runed him Swift with SPD/HP%/HP% but trying to change it as soon as possible. Keep in mind.  Another positive thing about bella is that it´s very easy to max his skills. !!Bella is a must have for everyone!!

SECOND AWAKENING INFO:
If anyone is looking to 2nd awake Bella there are some things to be known:
1.- Significant stat improvement. The 2nd awakening provides a good improvement in HP, Def and Atk stats, making Bella more powerful specially in defense.
2.- New base Skills. All 3 skills are set on a basis similar to the full developed skills of the 1st awakened Bella, so you don´t lose cooldown times or damage, only a 1% heal.
3.- Skill upgrade. Honestly, skill upgrades don´t seem to be a must here. S1 is mainly damage and bella is not a DD. S2 is damage and atb boost, not worth for 2 devilmons. And S3 is 3,5% healing and 10%atb boost, also difficult to assume for the "cost" of 2 devilmons. The best point of this 2nd awake is that you don´t need to further skill up bella to get a good performance.

I´ll drop some screenshots of the same monster with 1st and 2nd awakening to check the stat improvements: 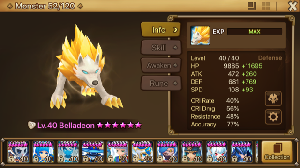 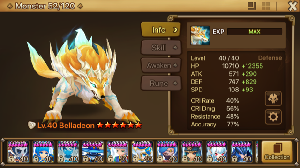 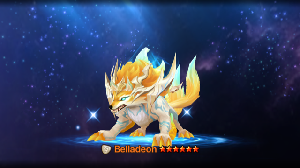 I have a question, how do you skill the new awake bella? I can't figure it out, please help ;  ;

@MichiArt you need to use DEVILMONS or another 2nd awake Inugami to further skill up (As Mafrank83 already said), but honestly, I DON´T THINK it´s necessary here.

So you have to second awaken other inugami and feed them to him...either that or devils. Hence why Com2us has dropped these massive devilmon packages.