Add Camilla to your monsters!

Camilla is available as a funko Pop Figure since 6th November: 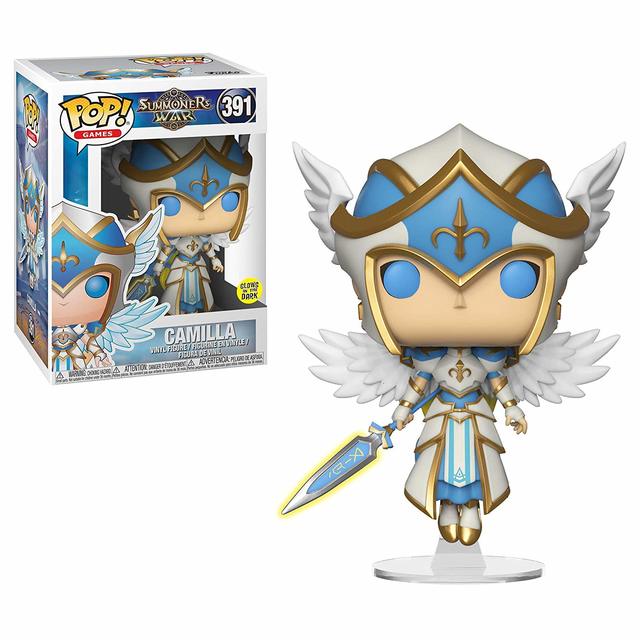 Camilla is a great nat 5 monster for PvP.

She is good thanks to her passive which make her very tanky when she becomes hit by a critical hit (she halves crit damage dealt to her).

There are two main build for Camilla:

The best sets to use alongside Violent are Nemesis, Revenge or Destroy (for attack Camilla Nemesis or Revenge are better, you want to get turns or counterattacks)

Build her with lots of HP, both main stats and substats, alongside defense, speed, attack and crit rate. If you get hit by a critical hit, remember that you will reduce 50% of the incoming damage, so since many heavy hitter will crit with high percentages, you will reduce the incoming damage by50% in most of the cases. So, for example if you have a total of 40k max HP, and if you are defense broken, a single critical hit has to deal 80k damage to oneshot you (and that's very unlikely, a part from some Lagmaron's squall).Destroy runes here are a viable solution, since the enemy if the enemy cannot take you down, you will slowly decrease his max HP and win.

Your main threat are Seara's Bombs, since the damage of bombs do not crit, so it will be full damage. To counter that build Camilla with at least 35% resistance.

Camilla is a very good monster for pvp, especially defense.

In-depth stats about Camilla could be retrieved on SWARFARM

Leader Skill:
Increases the Critical Rate of ally monsters in the Arena by 33%.

Sword of Promise
410%
Attacks with a sword. [Seal of Water] is automatically activated if the enemy dies.

Seal of Water
440%+11%
Attacks an enemy, dealing damage proportionate to the enemy's MAX HP, and decreases its Attack Speed for 2 turns. (Reusable in 4 turns)

When struck with a critical hit, reduces critical damage by half and removes all harmful effects. Additionally, it will recover 10% of its maximum HP each turn. [Automatic Effect]

How to get Water Valkyrja in Summoners War

How many Devilmon to max skill-up Camilla?

Mininum and maximum stats for any level of Camilla

KainMH3
21 March 2017 18:02
As any other Valkiry, Camilla is a PvP focused unit, and as all of her cousins, she is an amazing monster, but in this case we are talking about a very special one: Camilla is without much discussion the most difficult and hard to kill unit in the entire game; Only the upgraded Rakan can be so hard and dangerous to kill. It is the passive the skill that makes Camilla so special, and basically it means auto-heal every turn + auto-cleanse and half damage reduction on every critic on her. As in mid-late game nearly 100% of the nukers have high critical rates, Camilla will take half damage and full clean all negative effects on every hit she takes. When runed Violent, she may proc and heal 10% of her health every turn, so she is hard as a rock and depending on the rune build she can be really dangerous. Usually the main build is Violent/whatever SPD/HP/HP, an alternative one will be SPD/CrDam/HP and only if you can get godly runes with huge SPD substats you can build a ATK/CrDam/HP Camilla wich can be the darkest dream of any enemy. Her damage output depends mainly in the rune4 main stat and the skill leveling, but considering her as a support tank, she can do some good damage specially to fire monsters. I will state that if you plan to do a top annoying build that can drive your enemy nervous and mad about Camilla, you should rune her Violent/Destroy. This is the ultimate set for her, as the max HP reduction in a long battle will always grant you some good chances of victory. Camilla is usually used to tank enemy wind monsters that will always targer her while you can easily hunt them with any other nuker. Be careful when fighting vs a Camilla, cause even when oblivioned shes pretty hard to kill.
Reply

KainMH3
27 April 2017 17:14
Well, I´ve tested her in Dragon B10, Arena, Guild Wars and RTA. Fuck off the %HP runes. Her passive gives her enough sustain so if you have this beast rune her ALL OUT ATTACK: %ATK/CrDam/%ATK and watch your enemies claim for mercy. Get all the HP and SPD you can in the substats cause both are capital too.
Reply

yeokax
28 June 2017 05:23
I prefer a balanced build relative to skills, if I get her I'll rune her Violent Nemesis Speed/Critical Damage/Attack, she only need turns to heal and cure herself, the rest all damage.

KainMH3
28 June 2017 07:56
Damage won´t be enough if you use SPD on slot2. I´ve tryed it, and it doesnt work. With ATK/CrDam/ATK you can get an awesome water nuker with a lot of sustain, much more than Theomars. Try to get the SPD in the substats better than using a main even rune.

agsparks
28 June 2017 12:49
The only Camillas I have ever been afraid of are Tankmillas. Violent is a must.

@agsparks I use mine in Ofense, and it doesn´t work with HP. Ive tested her Full HP, SPD/HP/HP, SPD/CrD/ATK and ATK/CrD/ATK and I choose by far the last option. I suppose it´s personal, as I don´t have any other water Nuker but Theomars. And also the fact that I love having a Nuker that it´s very hard to kill. A Tankmilla is useless in PVP offense and my build is usable both in offense and defense.

However, I agree with you that Tankmillas can be a real PAIN and can ruin your day, but I found mine much more useful and fun to fight with.

agsparks
28 June 2017 13:34
I don't have a Camilla, so I can't speak to what is better for AO. I just know that good Tankmillas are damn near impossible to kill even after the fix to her passive. Water nukers are also the higher number of monsters I've pulled. Fire is where I fall short, and I have recently had to 6 Raki to fill my second Fire nuker slot next to Zaiross.
Login to Comment

Other attributes of Camilla