Add Orion to your monsters!

Orion (Water Brownie Magician) is one of the best support monsters with attack bar boost and defense break skills in Summoners war.

Orion is available as a funko Pop Figure since 6th November: 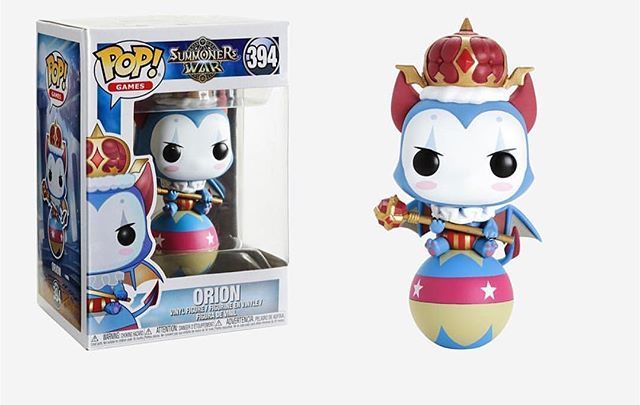 Let's see why he is so popular expecially in arena.

His second third skill is a bar increaser just like Bernard's with the exception that Orion's one will also randomly apply 4 debuff to random enemies (one enemy can be targeted from all 4 of them). Orion will use defense break, remove beneficial effects, stun and heal block debuffs.

With first skill he can get another turn, like a built-in violent proc.

He is really good in arena defense since, if he is speedy, in the first turn it's easy to get allies bar raised or enemy def broken.

High speed and Violent runes are a must.

In RTA Orion brings some unpredictable beaviour and a little bit of randomness, due to his first skill he can go over the violent proc limitation by resetting procs when getting other turns.

Orion in Guild and Siege

He is pretty common used in Defense paired with a speed leader, an AoE defense breaker and an AoE Nuker, this combination can be used even in attack, most common team are based on Galleon, Orion, AOE Nuker.

In-depth stats about Orion could be retrieved on SWARFARM

Leader Skill:
Increases the Defense of ally monsters by 25%.
Run Run
300%
Bounces towards the enemy to attack and gets another turn with a 30% chance.
Fly Fly
240%
Attacks all enemies with giant orbs, decreasing their Defense for 1 turn. This attack lands as a Crushing Hit, regardless of the enemy's attribute. (Reusable in 4 turns)
Harmless Prank
N/A
Randomly selects an enemy 4 times to grant one of the following effects: remove a beneficial effect, stun, decrease Defense, or disturb HP recovery. Additionally, the Attack Bar of all allies will be increased by 30%. (Reusable in 5 turns)

How to get Water in Summoners War

How many Devilmon to max skill-up Orion?

Mininum and maximum stats for any level of Orion

KainMH3
12 April 2017 16:32
Orion, the water brownie... definitely one piece of amazing madness it the battle. This is by far the most crazy going monster you will face in PvP battles, doesn´t matter if it´s by your side or in the enemy team, Orion is just IMPREDICTIBLE. He may change the tide of a battle with a single use of his third skill, the feared Harmless Prank. Orion has totally demoted Bernard as speed leader in the advanced PvP game, and most players have given Bernard´s best speed runes to him. The reasons are multiple: Orion can clean shields or inmunity wings on an enemy plus randomly place def break, stun or disturb recovery on the same target or others. Harmless Prank is too RNG based, but its incredibly fun as everytime you use it is like playing the roussian roulette. Orion is an amazing speed buffer with unpredictable effects, has a 1-turn AoE Def Break in the second skill and a self-violent build in the first one. Even after he´s been nerfed in the latest 3.2.X version, he remains capable of using the first skill twice and then proc again to use the third in the same turn. His extra turns have always a 30% fixed chance so its much better than a Violent build that starts with a 22% percentage that drops every time it procs. After a lot of testing and discussion in my guild and even after the recently nerfed Orion favours the Violent build I still believe that SWIFT runes are the key to use this monster. Its just like Bernard: go first or die. Orion has to outspeed Bernard, Chloe and Tiana to use Harmless Prank and destroy the enemy strategy, so you are going to need the fastest you can get. Do not regret to unrune Bernard, Orion is much better than the Griffon in late game PvP, and will be a must both in Arena and Guild Wars offense and deffense. He is disobedient, rebel and wild, but overall he is fun, and you will like him.
Reply

batmanrevived
12 April 2017 16:50
Totally agree with Kain's review, i have left all my best swift rune on him and even after the nerf he still remains godlike! i have only one doubt, i am C1 and still can't decide if is better bring Chloe or Orion for arena defense. do you have any hint?
Reply

KainMH3
12 April 2017 17:27
At C1 level you can expect a lot of players owning monsters like Juno, Praha, Chiwu (there are lots of Chiwus out there, where the fuck is mine?) or even Gemini that will spoil Chloe´s invulnerability. Everyone know what chloe is going to do, but no one knows what the hell Orion will do... So at C1 and above I think Orion is much more annoying in AD or GWD than Chloe. OF COURSE, it´s only my oppinion, but Chloe has left AD since I got a decent speed Orion and a Speed leader for him.
Reply

batmanrevived
25 April 2017 15:35
Got orion on my AD following your hint, thanks man my AD is shining with Orion (will / swift)
Reply

Gokaa
26 October 2017 12:21
I think Orion should get a little bit nerf again, like make the "harmless prank" a 4 turns cd.
This monster is cancer really.

Build him with most speed as you can and accuaracy, that's all.
If you can reach a good amount of speed with violent runes, then enjoy C2 lads !
Reply

bestsummoner
05 November 2017 11:16
Can't agree more with you. I have an AO that can bring me to G1 but my AD sucks and can support only C1. I have recently replaced theomars in my AD with a nice speeded Orion (250speed but i'm waiting reapprisals next week to pray RNGesus and get more speed substats :D), this new AD got me stay C2 with not so much effort.