Add Diana to your monsters!

In Human Form, Diana has a good passive that increases her attack bar whenever she gets a critical hit.

Also, the second skill in Human form is a 4-hit skill on single target, so if she crits 4 times, thanks to her passive she gets another turn. That means that crit rate on her is very important.

This second Human Form skill can be very effective against Theomars since Diana removes beneficial Effects, it's like the one from Eshir, but much better.

Diana seems to be very good in pvp Guild Wars and Arena both Defense and Offense and she can have a good spot on Giant B10 teams, being aWind monster and so with elemental advantage against the Boss, and putting Continous Damage if she dispels with the second skill. 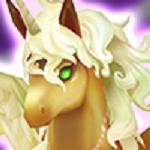 Lightning Horn
180%+12%
Attacks and Stuns the enemy for 1 turn with a 25% chance. The damage increases accordingly to your MAX HP.

Messenger of the Wind (Passive)

Increases your Attack Bar by 15% each when other allies are attacked. [Automatic Effect]

Lightning Horn (Human Form)
400%
Attacks and Stuns the enemy for 1 turn with a 25% chance.

Inevitable Wound
200% x4
Attacks the enemy 4 times and removes 1 beneficial effect each. Inflicts Continuous Damage for 1 turn if you succeed in removing the beneficial effect. (Reusable in 5 turns)

How to get Wind in Summoners War

How many Devilmon to max skill-up Diana?

Mininum and maximum stats for any level of Diana

jltren
27 February 2017 16:40
Just pulled, awakened and 6*'d, on release day - Thank you Com2us Initial reaction is potential meta for defences, inbuilt nemesis 100% proc, perfect against lushen teams, high HP means the shield given is very good. 1st AOE attack increases her ATB enough to cut in and put on shield if used with a Chasun or similar would almost ensure your defence gets a turn. Attack seems low but I guess shes not there for that, when in human form on defence the adding dots attack could be the game changer.
Reply
Login to Comment